As of 18 November 2020, there have been 33,844 reported dengue cases this year, with 355 cases reported last week. While this is five times lower than the peak of 1,792 seen in July this year, the weekly number of dengue cases remains high, at about two times more than the number of cases seen in the corresponding period averaged over the last three years. This is worrying, as we may enter next year with an atypically high number of dengue cases, potentially leading to another dengue outbreak next year. To keep the awareness of dengue high and sustain preventive action amongst the community, the National Environment Agency (NEA) is embarking on a new campaign during this year-end holiday season, to arrest the possibility of a second year-end dengue peak. In addition, as NEA has found a higher incidence of Aedes mosquito breeding and dengue cases in landed residential homes, compared to private apartments and HDB flats, NEA is working with Grassroots Leaders to step up dengue prevention efforts at landed residential estates. This will include distributing Mozzie-Proof Your Home tool kits to close to 75,000 landed residential homes in Singapore.

NEA will be distributing Mozzie-Proof Your Home tool kits (refer to ANNEX A for visual of the tool kit) to landed residential homes, to urge residents to take measures to prevent mosquito breeding within their home and compounds, to prevent dengue transmission. The tool kit comprises:

As the topography of landed residential homes is more favourable for mosquito breeding than private apartments and HDB flats, due to the larger surface areas and greater variety of structures and receptacle types, NEA encourages residents to practise additional measures to prevent mosquito breeding within their homes and compounds. These include turning over containers and storing them under shelter when not in use; covering any water storage containers and using the water in such containers promptly; maintaining water fountains regularly and scrubbing the interior surfaces of fountains to remove mosquito eggs that can attach to such surfaces; as well as clearing roof gutters and drains within the compounds, to prevent chokes and accumulation of stagnant water. Bti larvicide should also be added to stagnant water bodies that cannot be removed. Diligently carrying out all the above actions will lower the risk of being infected with dengue, and thus protect residents and their families.

Dengue cluster alert banners will continue to be put up in landed residential estates, to remind residents to do the Mozzie Wipeout. NEA encourages everyone to use the resources available on our website and myENV app to receive updates on the dengue situation, and to take proactive action to protect themselves and their loved ones (refer to ANNEX B for new campaign advertisement). Materials are available for download at go.gov.sg/mozzieproof.

106 dengue clusters have been reported as of 18 November 2020, a decrease of 15 clusters from the previous week. With the concerted efforts of NEA and the community and stakeholders, the following dengue clusters were closed last week:

Overall, we have closed about 96 per cent, or 2,836 of the 2,942 dengue clusters notified since the beginning of this year. We have also observed a slower rate of disease transmission at some of the larger dengue clusters, such as at the 58-case cluster at Jalan Limau Bali, with an average of less than one case reported per day in the past two weeks.

Despite the recent drop in cases, NEA and its IADTF partners are not letting their guard down, as the Aedes aegypti mosquito population in some areas remains high. Coupled with the still high weekly cases, a second year-end dengue peak cannot be precluded. An unusually high weekly dengue case load towards the year-end can carry over to the next year, increasing the risk of a dengue outbreak.This was the trend observed coming into  2014 and 2020, both dengue outbreak years. Therefore, unlike previous year-end periods, NEA will continue to adopt a high tempo of preventive inspections to remove mosquito breeding habitats and further slow down dengue transmission. Some of these include areas that have not seen dengue transmission this year, areas with high Aedes aegypti mosquito population adjacent to dengue clusters, and also construction sites and industrial premises in close proximity to residential areas. NEA will also continue to work closely with Grassroots Advisers and community volunteers, to reach out to and advise residents on dengue prevention efforts.

It is critical that stakeholders and the public continue to work together with NEA, to arrest the high Aedes aegypti mosquito population in the community and break disease transmission. Residents, especially those residing in dengue cluster areas, should do their part and carry out the three protective actions against dengue – spray insecticide in dark corners around the house, apply insect repellent regularly, and wear long-sleeve tops and long pants. All stakeholders should also continue to do the Mozzie Wipeout at least once a week, and ensure that their homes, premises and immediate surroundings are free from stagnant water.

For more information, please submit your enquiries electronically via the Online Feedback Form or myENV mobile application. Alternatively, you contact us at 6225 5632. 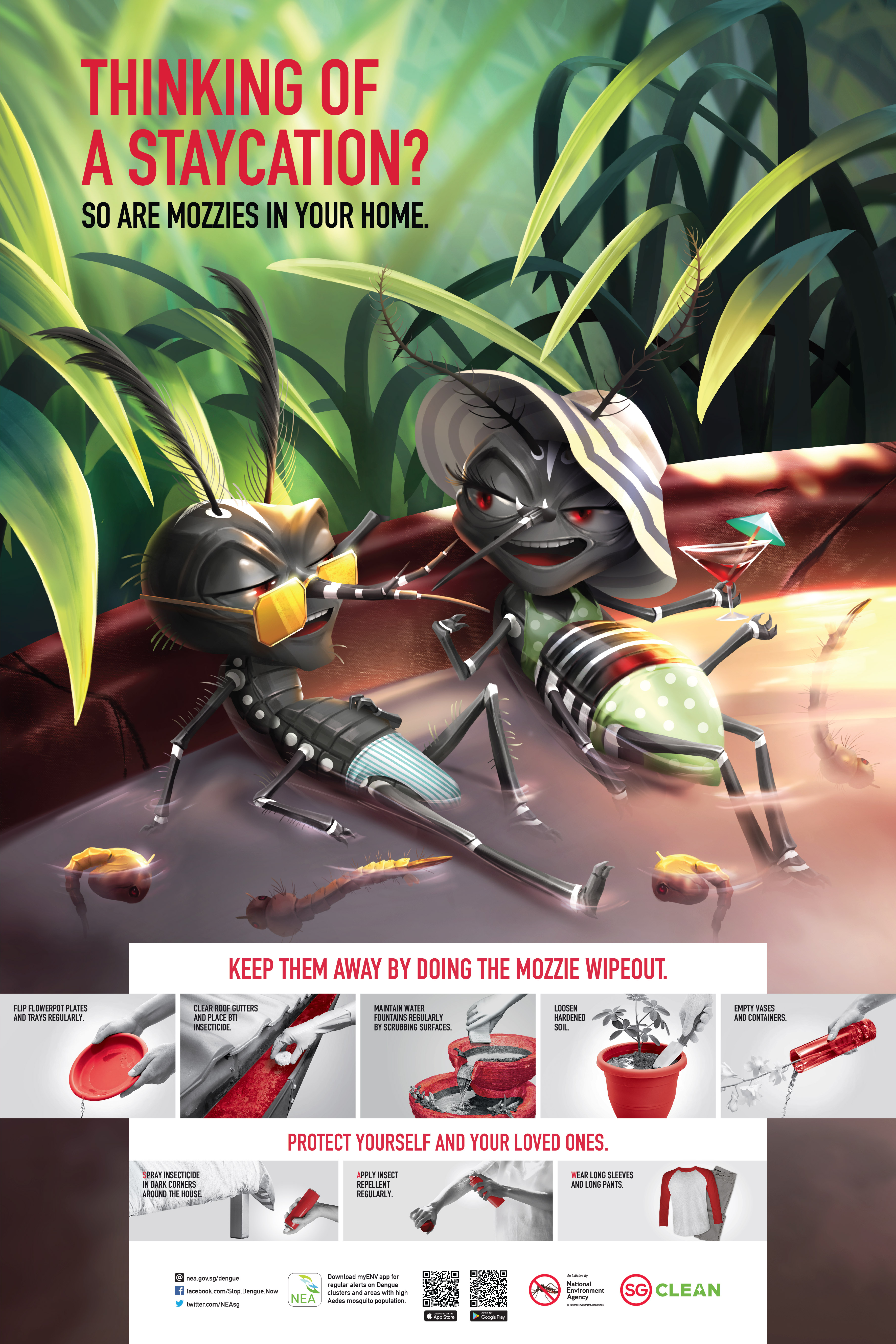