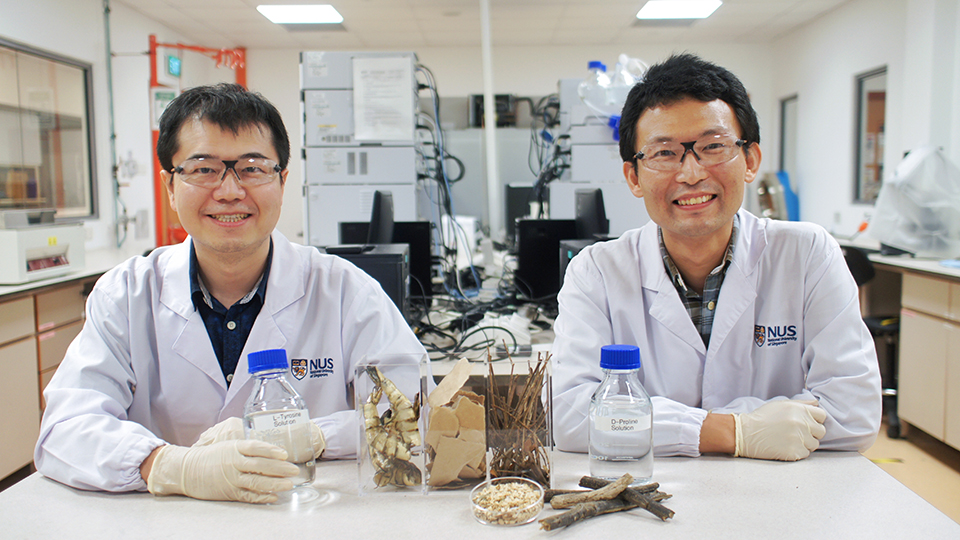 The NUS research team led by Associate Professor Yan Ning (left) and Assistant Professor Zhou Kang (right) has developed an integrated upcycling process to produce high-value amino acids from waste materials. The shells of crustaceans and wood waste such as branches pruned from trees usually end up in landfills. These waste materials are given a new lease of life to become nutritional supplements and medicine, with the help of a novel process developed by researchers from NUS.

A team led by Associate Professor Yan Ning and Assistant Professor Zhou Kang from NUS Chemical and Biomolecular Engineering devised a method to turn shells from prawns and crabs into L-DOPA, a widely used drug to treat Parkinson’s disease. A similar method can be used to convert wood waste to Proline, which is essential for the formation of healthy collagen and cartilage.

The NUS team’s conversion approach can potentially play a pivotal role in the chemical industry, as the movement of waste-derived compounds has been gaining momentum in a bid to reduce reliance on the use of non-renewable fossil fuels and energy-consuming processes.

From waste to useful chemicals

The global food processing industry generates as much as eight million tonnes of crustacean shell waste annually. Concurrently, Singapore generated over 438,000 tonnes of wood waste in 2019, among which include branches pruned from trees and sawdust from workshops. Deriving ways to upcycle these food and agricultural waste materials into useful compounds will reap benefits without straining landfills.

Although reusing waste materials has gained traction in recent years, the typical output of chemicals produced from waste recycling is often less diversified than the conventional chemical synthesis pipeline which uses crude oil or gas. To overcome the limitations, the NUS researchers came up with a pathway that marries a chemical approach with a biological process.

They first applied chemical processes to the waste materials and converted them into a substance that can be “digested” by microbes. The second step involves a biological process, akin to the fermentation of grapes into wine, where they engineered special strains of bacteria such as Escherichia coli to convert the substance produced in the chemical process into a higher value product such as amino acids.

The NUS team took four years to derive their method and applied it to obtain high-value chemicals from renewable sources in a sustainable way. 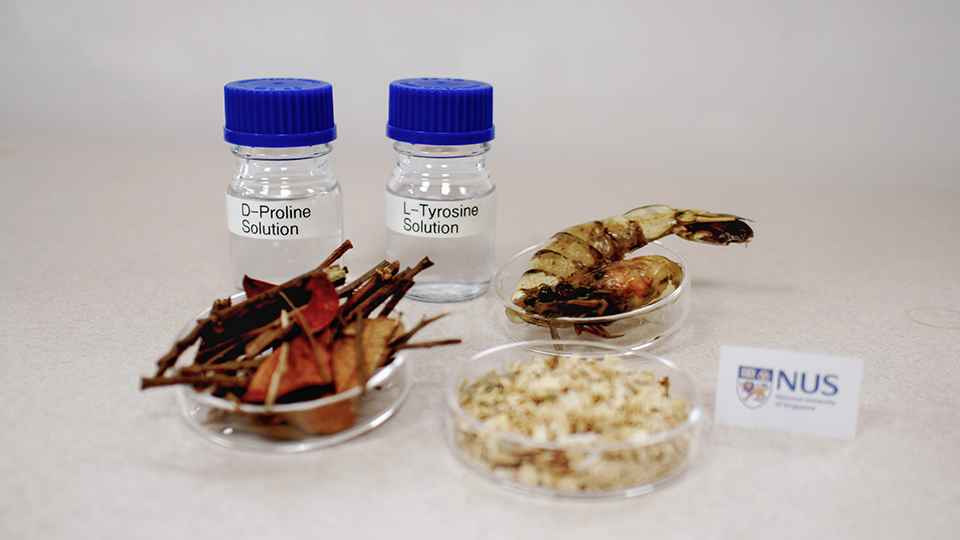 Compared to conventional methods of producing amino acids which require sugars as the substrate, the novel method developed by the NUS researchers uses the abundant food and agricultural waste as the starting raw material, thereby cutting down cost

Conventionally, L-DOPA is produced from L-tyrosine, a chemical made from fermenting sugars. With the approach developed by the NUS team, crustacean waste is first treated using a simple chemical step, allowing it to be used by microbes to produce L-DOPA.  The yield of the NUS method is similar to that achieved in the traditional method using sugars. In addition, compared to glucose, the most common sugar used, which costs between US$400 to US$600 per ton, shrimp waste costs only about US$100 per ton. Given the low cost and abundance of shell waste, the NUS team’s process has the potential to provide L-DOPA at a lower cost.

Proline, on the other hand, is conventionally produced through pure biological processes. The NUS team’s unique method has now replaced most of the transformations by using chemical processes, which are much faster. As a result, the new integrated process could achieve higher productivity and potentially lead to reductions in capital investment and operating costs.

The research on producing amino acids such as L-DOPA from crustacean shells was first published online in the Proceedings of the National Academy of Sciences (PNAS) on 25 March 2020, while the work on producing Proline from wood waste was reported in Angewandte Chemie on 27 July 2020.

“Chemical processes are rapid and can utilise a variety of harsh conditions such as extreme heat or pressure to break down a wide variety of waste materials as no living organism are involved, but they can only produce simple substances. On the other hand, biological processes are a lot slower and require very specific conditions for the microbes to flourish but can produce complex substances which tend to be of higher value. By combining both chemical and biological processes, we can reap the benefits of both to create high-value materials,” explained Asst Prof Zhou.

Potential to upcycle other types of waste

The NUS team’s methodology has the potential to be applied to different types of waste materials, and they can tailor the process, based on the type of waste as well as the target end product.

Moving forward, the team is looking to adapt their unique process to other forms of waste, such as carbon dioxide and wastepaper. Such development would reduce the society’s reliance on non-renewable resources for acquiring chemicals which are important constituents of many nutritional supplements and medicine today.

“Our novel chemical-biological integrated workflow offers a general pathway to produce a variety of high-value organonitrogen chemicals. While it may sound simple on paper to just combine two different methodologies, the devil is in the details. Given that these chemicals are found in a vast array of commercially valuable pharmaceuticals, pigments and nutrients, we are excited to expand our research and develop new methodologies to produce value-added chemicals from other abundant, locally available substrates found in Singapore,” shared Assoc Prof Yan.

The research team is also planning to scale up the processes currently developed in their laboratories, and to work with industrial partners to commercialise this technology.

Uncovering The Rise And Challenges Of Singapore Deep Tech Startups

How Do You Measure The Value Of A Historic Site?