An underground masterplan that maps out Singapore’s underground spaces and their potential uses is set to be unveiled next year.

It will be released as part of the next Master Plan guiding Singapore’s development in the medium term, said Urban Redevelopment Authority (URA) chief planner Hwang Yu-Ning.

This subterranean masterplan will provide the first comprehensive look at what lies tens and hundreds of metres underground.

Ms Hwang said the URA is working towards having a more complete 3D map of the underground spaces and infrastructure here.

National Development Minister Lawrence Wong told The Straits Times that the Government has to take stock of what is underground, including pipes and power grids.

“We have to take stock and have a good database of information, and are compiling it as a central repository so we have a good basis plan,” he said.

Then National Development Minister Khaw Boon Wan had raised the idea of a plan for Singapore’s subterranean development in a blog post in September 2013.

Ms Hwang, who is also URA’s acting deputy chief executive, cited underground oil storage as a way to use underground space and free up surface land for other uses. 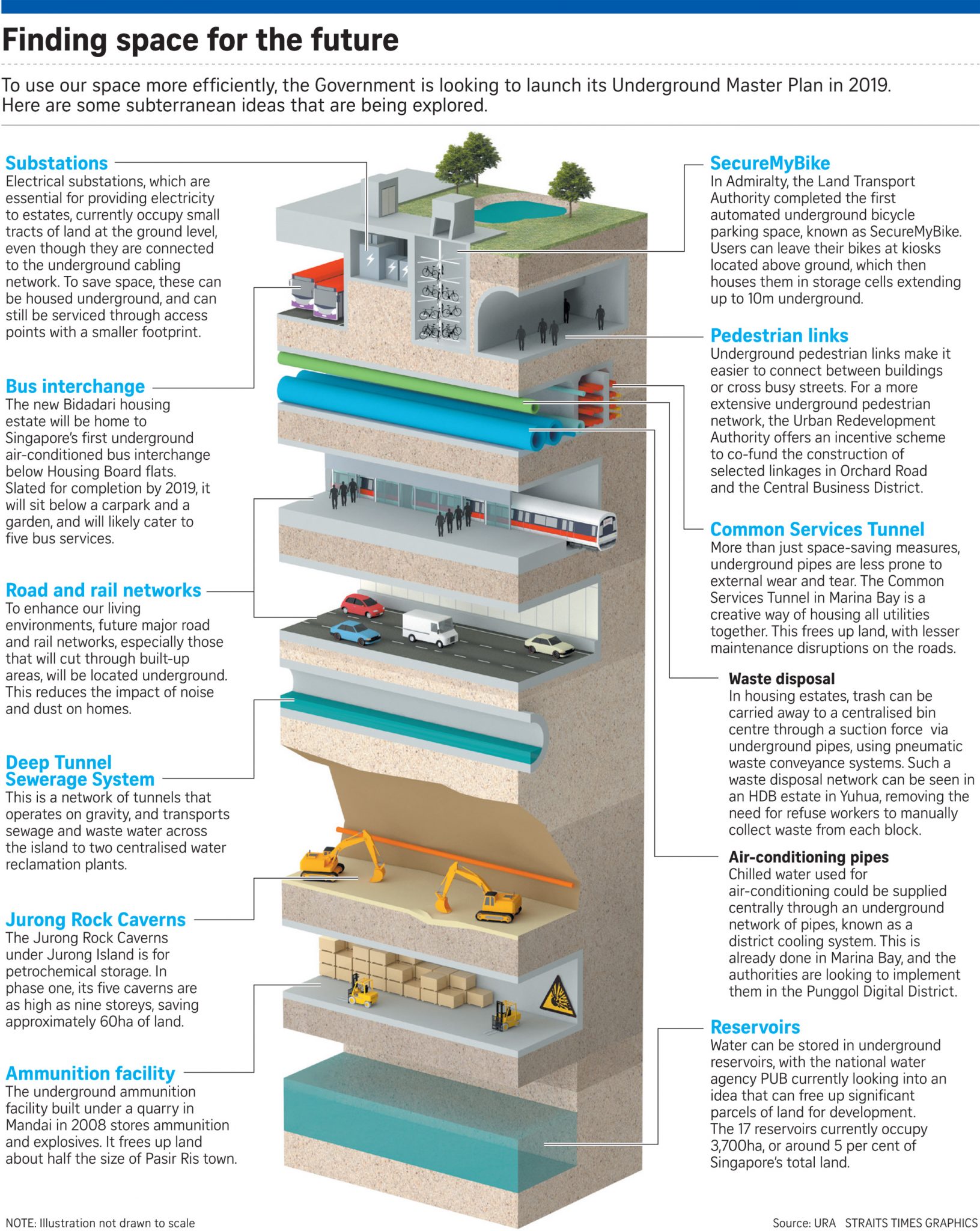 Already, the Government has made the necessary legislative changes empowering it to acquire stratas of underground space under private land in 2015, paving the way for a future underground metropolis.

The authorities also have to plan for new items at the district and national levels.

Government agencies are already actively pursuing some ideas, including relocating common utilities found above ground, such as refuse systems and electrical substations, underground.

National water agency PUB is studying if underground water storage is viable on a large scale.

On Jurong Island, hazardous petrochemical materials are stored in the 130m-deep Jurong Rock Caverns, freeing up more than 60ha, or 84 football fields, of development space on the island.

But Jurong Island consists mostly of reclaimed and island land managed under a single agency. Bringing that scale of project to the mainland has far more complications.

Currently, details of what lies underground are known only to each relevant agency.

The Energy Market Authority, for example, keeps track of where its power grids are laid around the country, while PUB manages its own database of its water pipes.

When a developer tries to build underground, it can be difficult to figure out whether there is scope to do so as the information is spread out, said Institute of Real Estate Studies director Sing Tien Foo.

Said the National University of Singapore associate professor: “With more emphasis in future on building our infrastructure underground, it is critical for the developer, building consultants and the public to know and have access to this information.”

While the URA intends for anyone to be able to see a complete map of what lies underneath, Ms Hwang noted that not everyone can access this information freely. This is due to security concerns.

“If we share too much, we are concerned about the security threat of having unsavoury people use this information. We are still thinking how precise and how much information we want to make available to the public,” she said.

Mr Tony Khoo, president of the Singapore chapter of the International Facility Management Association, hailed the emphasis on underground utilities to save space, though he noted that they will be far costlier than their terrestrial counterparts.

He also pointed out how an underground water pipe rupture today often leads to an entire stretch of road being dug up, disrupting traffic and residents. “This is why these facilities must be designed for easy maintainability, with ample access points above ground, to make sure that they are really sustainable in the long term,” said Mr Khoo.

Next What Smart-Nation Singapore Can Learn From Other Smart Cities

Singles’ Day Deals: Best Backpacks That You Should Get Now

CapitaLand Pledges S$300,000 To Community Chest’s The Courage Fund To Lead In Supporting The Singapore Community Affected By COVID-19

PISA 2018 Results Are Out: Singapore Ranks 2nd Out Of 79 Countries

Why Is It Important To Wear A Mask To Prevent The Spread Of COVID-19?

Which Countries Have The Greatest Economic Complexity?

Healthcare And Education SMEs To Receive More Support For Digitalisation