The National Parks Board (NParks) announced plans for a new recreational green network at Clementi Nature Corridor, today. The recreational green network will comprise 18 km of trails. This will include a new nature trail at the Old Jurong Line (Old Jurong Line Nature Trail) and a new Jurong Town Hall Park Connector, which will connect the Rail Corridor to Jurong Lake Gardens. In addition, the new Clementi Nature Trail will link the Clementi Forest Stream to the new nature park in Ulu Pandan west greenfield site, along the Bukit Timah First Diversion Canal. With this new recreational green network, the public will be able to experience nature while minimising impact to biodiversity. The network of trails, which includes new and existing park connectors, is targeted to be progressively completed from 2023. NParks will partner the community to manage and sensitively enhance the trails and green spaces of Clementi Nature Corridor. It will form the Friends of Clementi Nature Corridor to do this.

NParks will be curating a new nature trail that runs along the Old Jurong Line, a disused railway track that ceased operations in the early 1990s and runs through Clementi Forest. The humid and cool conditions of the Clementi Forest provide an ideal habitat for several rare and endangered species, including two terrestrial orchids – Dienia ophrydis (Common Snout Orchid) and Zeuxine clandestina (Green Jewel Orchid). With the increase in number of people going off trail, the orchids’ natural habitats have been impacted, resulting in a significant decline in their population. With the new 4 km nature trail, visitors can appreciate the natural and heritage elements of the Old Jurong Line, such as the old tunnels, railway track and bridges, while minimising ecological impact in the area. The Old Jurong Line Nature Trail will also be part of the 62 km Coast-to-Coast Southern Trail, the longest cross-island trail to date, which will extend from Changi Beach to Tuas. It will be progressively completed from 2024.

In addition, there will be a new 3 km long Jurong Town Hall Park Connector. Taken together with the Old Jurong Line Nature Trail, the entire 7 km recreational route will connect the Rail Corridor to Jurong Lake Gardens.

A second nature trail will be curated to connect the Rail Corridor to Ulu Pandan, where a sizeable nature park has been safeguarded in the western half of the greenfield site, which is richer in biodiversity. From the Clementi Forest stream, members of the public can walk along the Rail Corridor to the Ulu Pandan nature park, via the new Clementi Nature Trail and the existing Ulu Pandan Park Connector. The park connector, which connects back to the Rail Corridor, will allow visitors to explore the area in a complete loop. Clementi Nature Trail, which is about 2 km, is targeted to be completed by 2023. 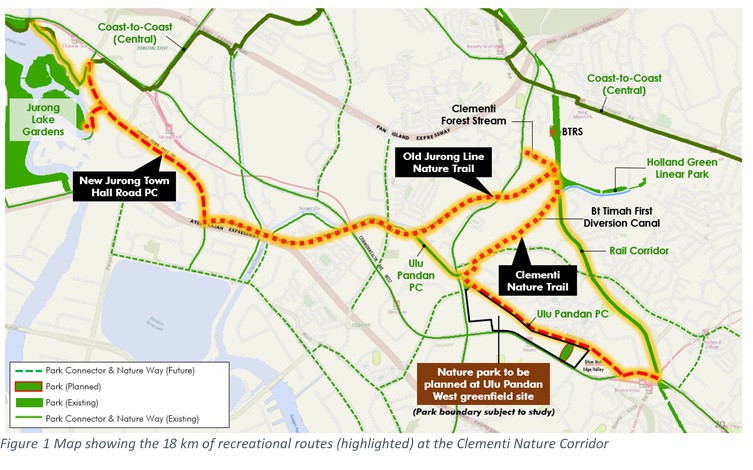