The Secret To Defeating Thanos All Along

The world, at least the Marvel Cinematic Universe, is buzzstruck with Avengers: Endgame fever. There is no lack of attention grabbing, spoiler mania, pre-speculations, post-speculations, and a look into the past and future of MCU and us.

Know that you are defeated most easily by apathy or feigned disinterest; and the most fundamental of quantum realities.

after all the the epic and superhero fatigue that some may have felt over the recent cinematic years,

… to inspire and lift us from the mundane, to believe there really is more than the mundane, and to act into turning the mundane into each our own epic.

Equally, split in the middle, are the ‘pragmatists’ and ‘realists’ or just the “don’t-care-ists” who in their equally right mind believe …

this is nonsense (half of the time silently wishing it was otherwise) and life is life; a fraction of the possibilities of our vast imaginations (or at least the creative imaginations of fiction).

Will not be watching the Avengers: Endgame any time soon.

Half of them, the unsnapped queues.

Half of the Other Half, just nowhere near the cinemas.

But here is to you, Marvel Superheroes!

If you lived to tell the tale.

If your coin flip destined you to the downside half of its probabilities.

Here is to Thanos.

You are now my cat of Schrodinger’s fame …

… and my Heisenberg confusion for the mean time, (regardless of all the spoilers and rumours).

Know that you are defeated most easily by apathy or feigned disinterest; and the most fundamental of quantum realities.

… as the Time stone will foretell, I yield and peer into a secret everybody knows except me (with a few bands of humanity unspoiled by your Endgame, yet).

And while even our modern all-knowing (pretend) brilliance channel is not immune to your effect (https://www.google.com/search?q=thanos) and our curiosity baited (click the gauntlet on the right side) … 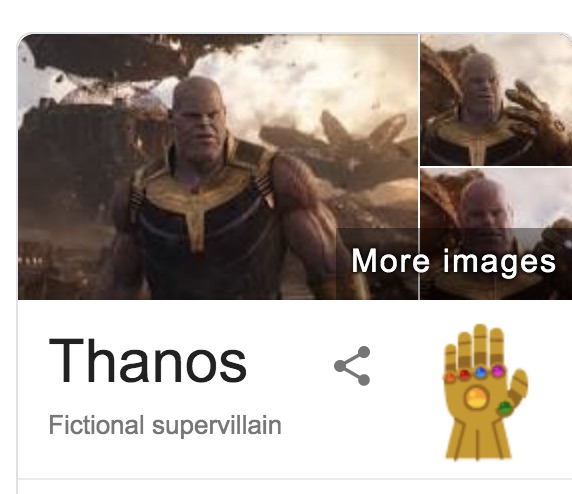 … a few of us knows the secret of defeating you, reversing your triumph (as beguilingly sensible your mission may be) …

… as easy as traversing bkWMgd.[data-hveid].g and snapping opacity: 0; visibility: hidden; out of existence …

How Big Will The Coronavirus Epidemic Be? An Epidemiologist Updates His Concerns

Big Tech Antitrust Hearings, A NOT Wallstreet Or Mainstreet Viewpoint