The National Environment Agency (NEA) and PUB, Singapore’s National Water Agency, have announced that the first phase of construction of Tuas Nexus has begun, and it is set to be completed in phases from 2025 onwards. The co-location of two mega facilities – the Tuas WRP and IWMF – will help forge a more sustainable Singapore by optimising land use and maximising energy and resource recovery. ​​

The world’s first integrated waste and water treatment facility to be conceptualised and planned from the ground-up, Tuas Nexus (refer to Annex A ​for the artist’s impression and infographic of Tuas Nexus) will be energy self-sufficient by harnessing synergies from Tuas WRP and IWMF. This is expected to result in carbon savings of more than 200,000 tonnes of CO2 annually, equivalent to taking 42,500 cars off Singapore’s roads. In addition, integrating both facilities will result in land savings of up to 2.6 hectares – about the size of four football fields, as compared to building the two as standalone facilities. ​​

​Tuas WRP, a key component of PUB’s Deep Tunnel Sewerage System (DTSS) Phase 2 project, will have an initial treatment capacity of 800,000m3 per day – the equivalent of 320 Olympic-sized swimming pools of water. Unlike conventional water treatment plants, it is equipped to receive both domestic and industrial used water streams from two separate deep tunnels for treatment. In a first for Singapore, Tuas WRP (refer to ​Annex B​ for more info) will also be capable of treating industrial used water to a sufficiently high standard for industries’ use. ​​Besides incorporating advanced physical, biological and chemical treatment processes, Tuas WRP will also house the largest membrane bioreactor facility in the world – this will enable the plant to be more energy efficient while occupying less space compared to existing water treatment plants and avoid the need for a long sea outfall. A NEWater factory to be built on the rooftop of Tuas WRP will significantly boost PUB’s NEWater production capability, further ensuring a robust and resilient supply of water for Singapore that can meet growing water demand and cope with the impact of climate change. ​​

Said Mr Ng Joo Hee, Chief Executive, PUB, “By itself, PUB’s Tuas WRP would already be breaking new ground, including housing the world’s largest membrane bioreactor. But when coupled with the NEA’s IWMF to form the Tuas Nexus, it would be so much more. We are building Tuas Nexus because it is the smart thing to do, as the sum would be far greater than its two parts. I believe the Tuas Nexus advances the state-of-the-art in sustainable urban waste management and resource recovery, and establishes a new international benchmark for the field.”​​ 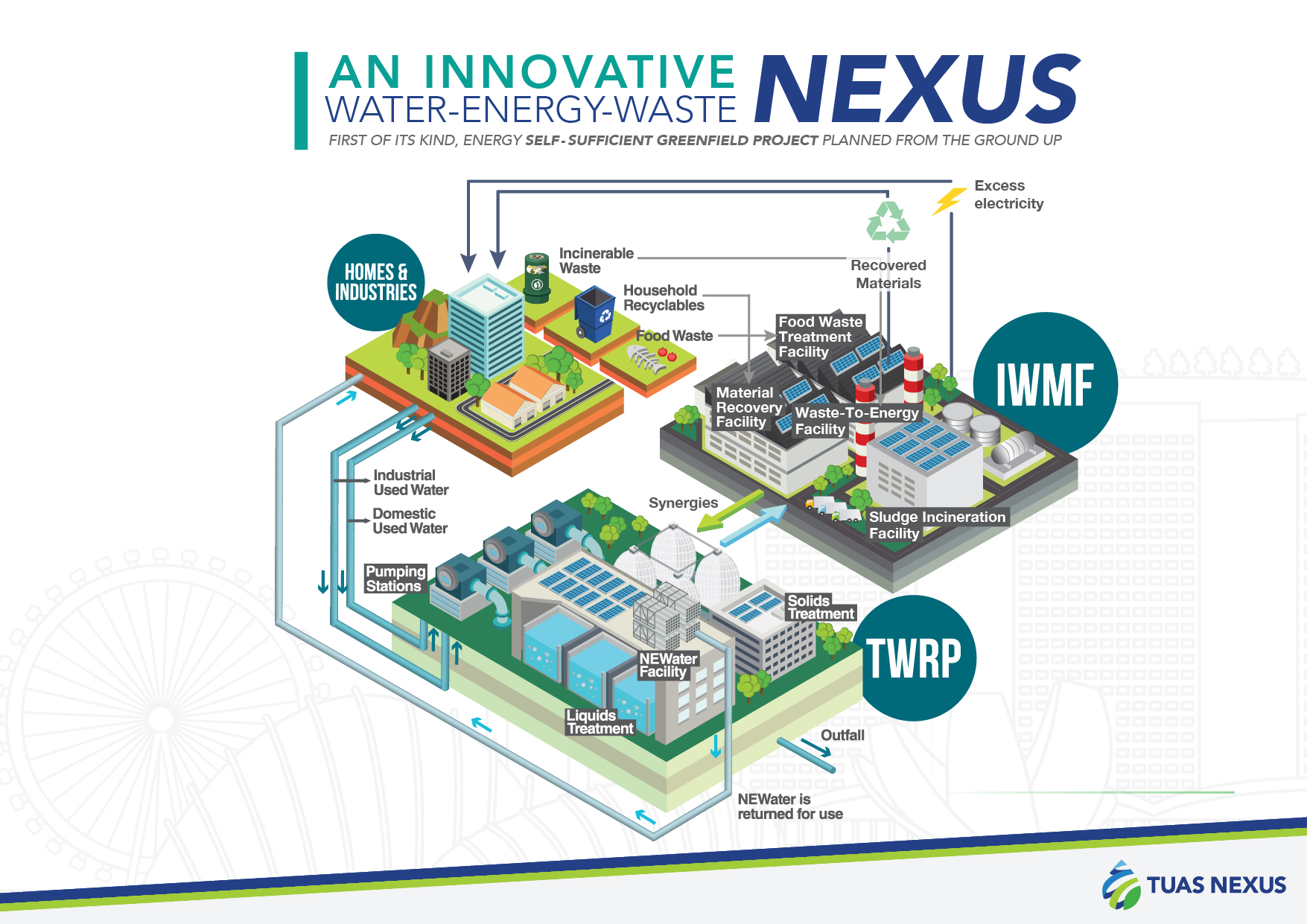 IWMF is an integral part of NEA’s long-term plan (refer to ​Annex C​ for more info) to meet Singapore’s solid waste management needs. It will be equipped with state-of-the-art solid waste treatment technologies to improve energy and resource recovery from waste. It is Singapore’s first integrated facility to treat incinerable waste, source-segregated food waste and dewatered sludge from Tuas WRP, as well as to sort household recyclables collected under the National Recycling Programme (NRP). ​​Besides being Singapore’s largest waste incineration plant when fully completed, IWMF will also be the most energy efficient yet, and for the first time, integrate an operational food waste treatment facility and sludge incineration facility to achieve higher food waste recycling rate and greater synergy with WRP’s operations. In addition, the IWMF’s automated Materials Recovery Facility will consolidate all recyclables collected under the NRP to achieve greater economies of scale, higher sorting efficiencies and recovery yields for various recyclable waste streams, such as metals, paper, and plastic. This will help boost Singapore’s overall recycling efforts and bring Singapore another step closer to realising its vision towards zero waste. These efforts are part of Singapore’s Zero Waste Masterplan, where targets have been set to strengthen Singapore’s climate, resource and economic resilience with an emphasis on a circular economy approach.

Mr Tan Meng Dui, Chief Executive Officer of NEA said, “Tuas Nexus is the world’s first greenfield project to harness the co-location synergies of two mega waste facilities for waste and water treatment. Besides being part of an integrated Tuas Nexus facility, the IWMF, on its own, will also be the largest, most advanced, efficient and integrated yet of our solid waste treatment facilities. The integrated facility shines the way for a more circular approach to resource management and, brings us one step closer to realising the vision of a Zero Waste Nation.” ​​

By employing the latest technologies, Tuas Nexus will harness the synergies (refer to Annex D for more info) of the water-energy-waste nexus from used water and solid waste. The by-product of one facility becomes a resource for the other facility. For example, IWMF’s Food Waste Treatment Facility will convert source segregated food waste into food waste slurry that is suitable for co-digestion with used water sludge at the Tuas WRP. The co-digestion of food waste and used water sludge will increase biogas production by 40 per cent at the Tuas WRP, compared to biogas yield from treatment of used water sludge alone. The biogas produced will then be combusted at the IWMF and the combustion heat energy recovered to improve the overall plant thermal efficiency and boost electricity generation. The electricity generated by IWMF will be used to sustain the operations of Tuas Nexus with excess to be exported to the grid. The excess electricity exported to the grid will be able to continually power up to 300,000 four-room HDB apartments.

Water demand in Singapore currently stands at 430 million gallons a day (mgd) – with population growth and economic development, this figure is expected to nearly double by 2060. PUB’s goal is to recycle every drop of used water, and the Deep Tunnel Sewerage System (DTSS) forms the backbone of our used water treatment system. Phase 1 of the project, which was completed in 2008, conveys used water from the eastern half of Singapore to PUB’s Changi Water Reclamation Plant, which is currently undergoing expansion. Construction of Phase 2 of the DTSS in western Singapore is currently underway and will be completed in tandem with Tuas WRP by 2025. ​​

Tuas WRP will received used water flows by gravity via two separate deep tunnels – one to convey domestic used water and another for high-strength industrial used water. These two sources of water will be treated separately. The plant will be equipped with two energy-efficient membrane bioreactor systems to treat 650,000m3 (or 143 mgd) of domestic used water per day, which is then purified further to NEWater, and 150,000m3 (or 33 mgd) of industrial used water per day, which can be sent back to industries for reuse. 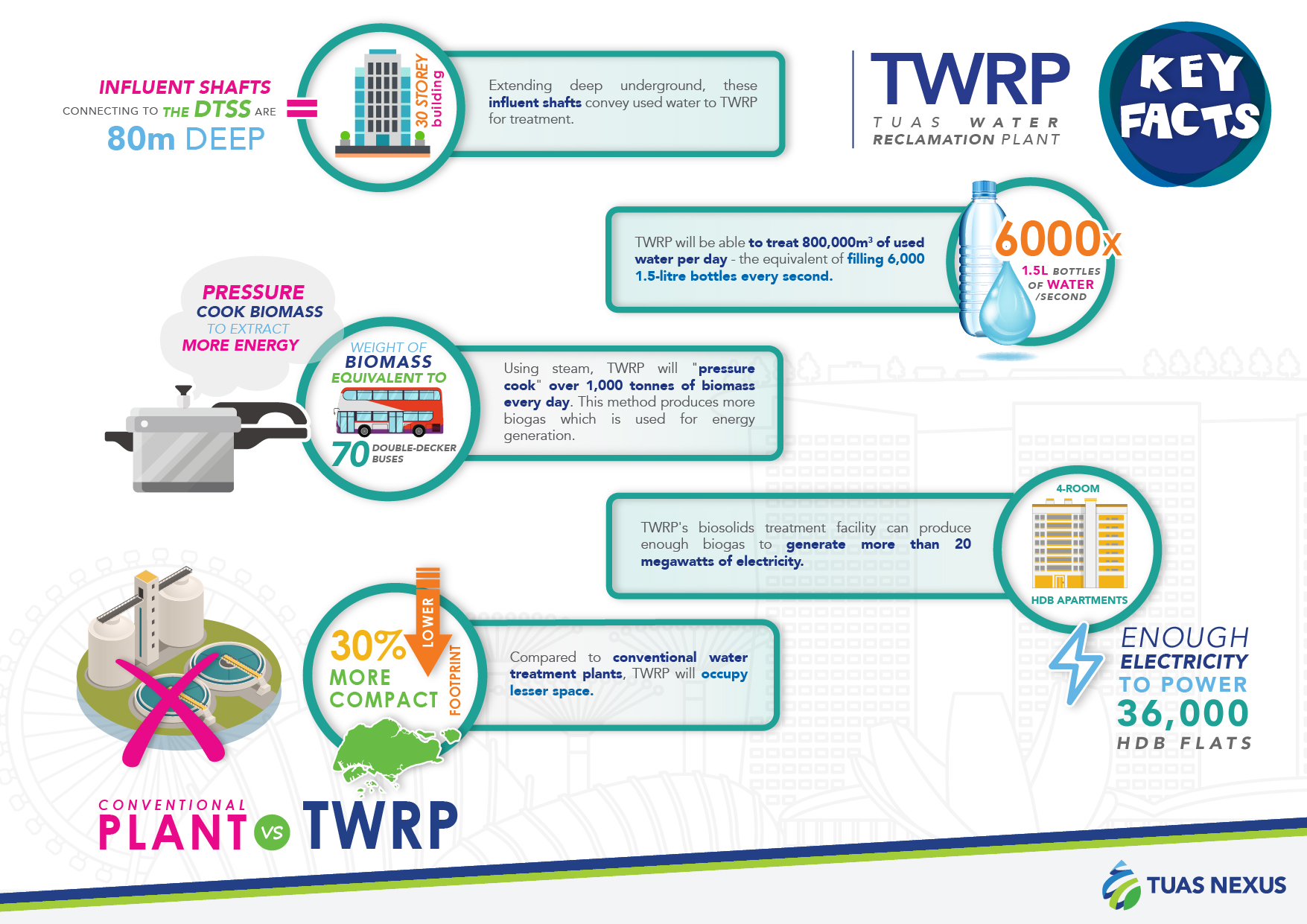 ​The first major process contract for the construction of Tuas WRP was awarded in July 2019, when Koh Brothers Building & Civil Engineering Contractor (Pte.) Ltd. and China Harbour (Singapore) Engineering Company Pte. Ltd. Joint Venture (JV) won the bid for the plant’s influent pumping stations (IPS). The IPS, which consist of five shafts extending up to 80 metres underground, will convey used water from the deep tunnels to the treatment units within Tuas WRP. In March this year, Sembcorp Design and Construction Pte Ltd was appointed to build the plant’s biosolids treatment facility, which will form the key interface between Tuas WRP and the IWMF. Most recently in June, PUB awarded the contract for the civil, structural and building services components of Tuas WRP’s Domestic Liquids Modules to Sinohydro Corporation Ltd (Singapore Branch). ​​

Another seven construction tenders worth more than $1 billion will be called before the end of 2021, including for the plant’s Industrial Liquid Modules responsible for treating industrial used water. ​​

Phase 2 of the DTSS project consists of the following:

a) 40km of deep tunnels running under Ayer Rajah Expressway and ending at Tuas WRP. These consist of the South Tunnel, which conveys mainly domestic used water, and the Industrial Tunnel. Tunneling works have been underway since April 2019.
b) 60km of link sewers to create an interconnected network that channels used water from the existing sewerage system to the deep tunnels.
​c) Tuas WRP and the integrated NEWater factory

With the completion of Phase 2 in 2025, two existing conventional water treatment plants located in Jurong and Ulu Pandan – as well as 37 intermediate pumping installations – will be progressively phased out. This will free up about 83 hectares of land for alternative uses. ​​​

Unlike the existing WTE plants which only incinerate waste, the IWMF will adopt an integrated approach to process multiple waste streams for higher resource and energy recovery while reducing its environmental and land use footprint. The waste streams that IWMF will be handling include incinerable waste, household recyclables collected under the National Recycling Programme (NRP), source-segregated food waste and dewatered sludge from Tuas WRP. A summary of the treatment facilities and capacities is in the table below:

Besides the use of natural ventilation and lighting, and green labelled building products, in the design and construction of the architectural façade, the IWMF will also integrate a viewing deck at its chimney to offer a bird’s eye view of the Tuas Nexus facility and the Tuas region, to all visitors for educational purposes. 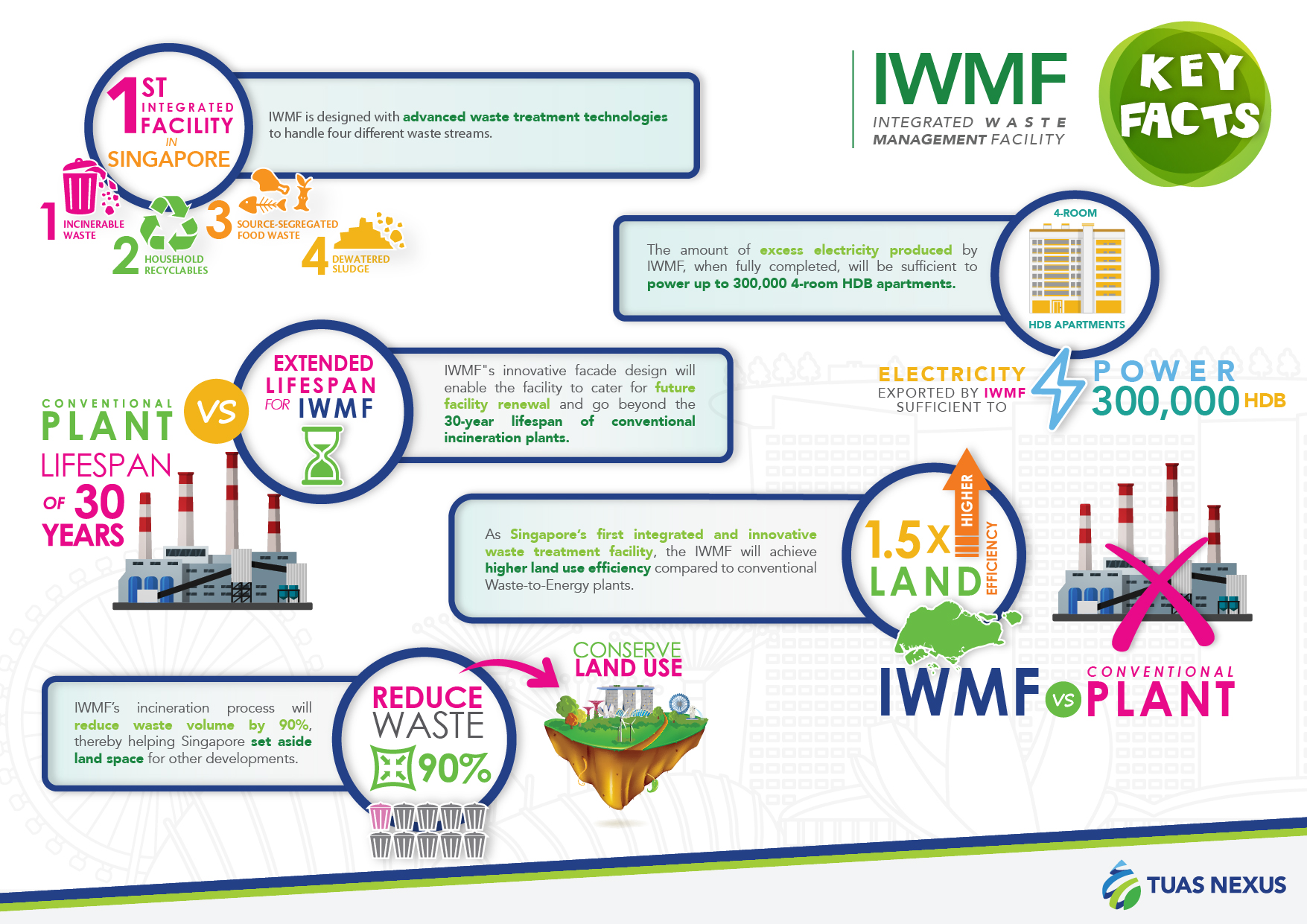 Waste Streams to be Treated at IWMF

Public Waste Collectors (PWCs) are required to collect commingled recyclables (paper/cardboard, plastic, metal and glass) from all residential properties. Currently, the recyclables are sorted at the MRFs operated by PWCs before they are sent to the recycling plants.

To optimise both process and land use efficiency, the sorting of recyclables will be consolidated and carried out at IWMF’s MRF. With better economies of scale and through the use of advanced automatic sorting equipment, the MRF will achieve a high yield of sorted recyclables.

In 2019, 744,000 tonnes of food waste were generated, of which 18 per cent was recycled. The rest of the food waste was disposed of at the WTE plants via incineration.

Currently, food waste that is recycled is mainly homogenous food waste from food manufacturers such as spent yeast/grains from beer brewing, soya bean and bread waste. The food waste is segregated at source and sold to recyclers for conversion into animal feed. In addition, more than 50 premises, including hotels and schools, currently segregate and treat their food waste on-site into compost for landscaping purposes or water for non-potable use.

As part of NEA’s overall waste management plan, several initiatives have been planned to help increase food waste recycling in Singapore. One of the initiatives is to collect food waste separately for treatment at the IWMF and subsequently co-digest with used water sludge at Tuas WRP.

IWMF’s Food Waste Treatment Facility will be able to segregate the inorganic materials from the organic fractions before turning the latter into food waste slurry suitable for co-digestion with used water sludge at the Tuas WRP. The co-digestion of food waste and used water sludge will increase biogas production at the Tuas WRP. The biogas produced will be combusted at the IWMF to enhance its overall plant thermal efficiency and boost power production.

The IWMF will also be receiving dewatered sludge from the Tuas WRP for incineration at its Sludge Incineration Facility.

NEA has adopted WTE incineration to manage solid waste that is not recycled as it is able to reduce the volume of waste by 90 per cent and thereby, help Singapore conserve landfill space. Once completed, the IWMF will have an incineration capacity of 5,800 tonnes/day.

Singapore Retains Position As One Of The Largest FX Centres Globally

Recovering Stronger From COVID-19 Through Innovation And Digitalisation

Singles’ Day Deals: Best Backpacks That You Should Get Now